Staff writer ▼ | May 13, 2015
ThyssenKrupp achieved its operating targets in the 2nd quarter and in the 1st half of fiscal year 2014/2015 and has specified and raised its forecast for the full year. 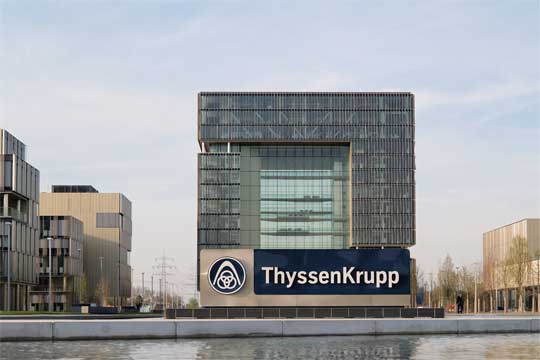 Order intake came to €20.5 billion in the 1st half, down only slightly, by 2%, from the prior year (prior year €20.8 billion). Besides sharply falling steel prices, the main reason for this decline was a major order at Marine Systems recorded in the 1st quarter of the prior year

All the other capital goods businesses showed steady to sharply rising order intake compared with the prior year. The elevator business again reported record new orders.

1st-half sales increased year-on-year by 9 percent to a total €21 billion (prior year €19.4 billion), thanks to strong organic growth in the capital goods businesses as well as positive exchange rate and portfolio effects. On a comparable basis the increase was 2 percent.

Adjusted EBIT from continuing operations in the 1st half increased significantly by 31 percent to €722 million (prior year €551 million). The 2nd quarter contributed €405 million to this, improving by 28 percent compared with the 1st quarter.

The main driver of this improvement was the successful implementation of efficiency programs. Altogether the ThyssenKrupp Group generated net income of €88 million in the 1st half (prior year €200 million).

This already includes the write-down taken in connection with the sale of the VDM group, while the prior year included a book gain on the sale of the steel mill in the USA. After deducting minority interest, net income for the period was €98 million (prior year €204 million); earnings per share came to €0.17 (prior year €0.37).

At €(706) million, free cash flow before divestments in the 1st half improved year-on-year by €154 million (prior year €(860) million) but as expected remained clearly negative.

This was due partly to a temporary increase in net working capital in the 1st quarter, caused among other things by the strike at AST in Italy and a major order at Materials Services. The 2nd quarter showed an improvement quarter-on-quarter and year-on-year of around €600 million and was almost break-even at €(55) million.

Net financial debt of the full Group increased by almost €1 billion to €4.6 billion in the 1st half. The increase was due mainly to the negative free cash flow as well as strong currency effects. ■

Emirates and Heathrow in new partnership