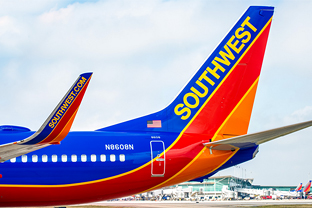 
Operating unit revenues increased 3.1 percent, on a 1.1 percent decrease in available seat miles and a 2.6 percent increase in average seats per trip, all as compared to first quarter 2013.

While the shift in the timing of the Easter and Passover holidays impacted March results, April bookings and revenue trends, thus far, are strong. Based on April's trends and current bookings for the remainder of the second quarter, the Company expects another solid year-over-year increase in its second quarter 2014 operating unit revenues.

The Company expects total acquisition and integration costs to be no more than $550 million (before profitsharing and taxes). Excluding special items in both periods, total operating expenses in first quarter 2014 decreased 1.2 percent to $3.9 billion, as compared to $4.0 billion in first quarter 2013.

As of April 21, 2014, the fair market value of the Company's hedge portfolio through 2017 was a net asset of approximately $252 million. Additional information regarding the Company's fuel derivative contracts is included in the accompanying tables.

As of April 23, 2014, the Company had approximately $3.5 billion in cash and short-term investments, and a fully available unsecured revolving credit line of $1 billion. ■