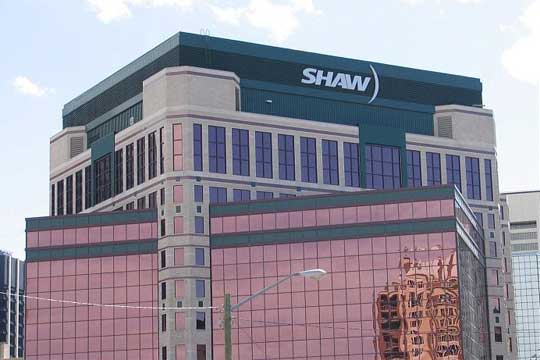 Slight increase   $5.24 billion in revenues for Shaw
Consolidated revenue for the three and twelve month periods of $1.26 billion and $5.24 billion, respectively, was up 1% and 2% over the comparable periods last year. Total operating income before restructuring costs and amortization1 of $525 million improved 6% over the comparable quarter while the annual amount of $2.26 billion increased 2% over the prior year.

Free cash flow1 for the three and twelve month periods of $143 million and $698 million, respectively, compared to $61 million and $604 million for the same periods last year.

The improvement was due to increased operating income before restructuring costs and amortization, lower capital investment and interest expense, partially offset by higher cash taxes.

Revenue in the Cable division of $837 million and $3.36 billion for the current three and twelve month periods improved 2% and 3%, respectively, over the comparable periods. Operating income before restructuring costs and amortization for the quarter of $412 million increased 4% over the same quarter last year and the twelve month period was up 3% to $1.63 billion.

Satellite revenue of $220 million and $878 million for the three and twelve month periods, respectively, compared to $219 million and $860 million in the same periods last year.

Quarterly revenue in the Media division of $231 million was consistent with the same quarter last year while operating income before restructuring costs and amortization of $41 million improved from $34 million in the comparable period.

On an annual basis Media revenue was $1.10 billion compared to $1.11 billion last year while operating income before restructuring costs and amortization was unchanged at $353 million. ■

President Energy confirms discovery of oil in the Paraguayan Chaco