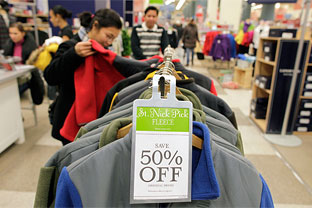 
This increase was driven primarily by higher initial franchise revenues (which were $7.8 million in the third quarter of 2013 compared to $1.5 million in the third quarter of 2012) and sales from new stores (net of closures). Partially offsetting these increases were a 2.0% decrease in comparable store sales and an unfavorable impact of the calendar shift due to the 53rd week in 2012.

The comparable store sales decrease of 2.0% was comprised of a 1.5% decrease in Hometown and a 3.4% decrease in Outlet. The 2.0% decrease was primarily driven by lower major appliance and apparel sales in Outlet, lower Hometown lawn and garden sales, lower tools-category sales in both segments, and lower consumer electronics sales following our planned exit from the this category in most Hometown stores. These decreases were partially offset by higher major appliances sales in Hometown.

The company recorded operating income of $13.2 million and $14.1 million in the third quarters of 2013 and 2012, respectively. The $0.9 million decrease in operating income was driven by a lower gross profit rate partially offset by higher net sales, lower selling and administrative expenses, and a $1.6 million gain on the sale of an Outlet store location.

Included in these impacts on year-over-year operating income was an estimated $5 million of higher operating costs in the third quarter of 2013 incurred as a result of operating as an independent public company since our separation from Sears Holdings Corporation in October 2012. ■