Staff writer ▼ | December 18, 2013
Nucor Corporation announced guidance for its fourth quarter ending December 31, 2013. Nucor expects fourth quarter results to be in the range of $0.35 to $0.40 per diluted share. 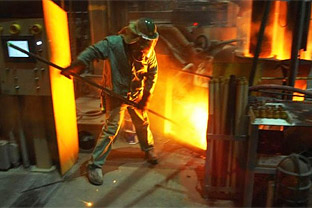 Also affecting earnings in the third quarter of 2013 was a net $14.0 million ($0.03 per diluted share) partial write down of inventory and fixed asset balances associated with the collapse of a storage dome at Nucor Steel Louisiana in St. James Parish. Affecting earnings in the fourth quarter of 2012 was a non-cash charge of $12 million ($0.02 per diluted share) related to inventory purchase accounting adjustments following the acquisition of Skyline Steel LLC in June of 2012.

Operating performance before LIFO expense for the fourth quarter of 2013 is expected to be similar to the third quarter of 2013. Sheet steel profitability has continued to improve in spite of the three week planned outage at company's sheet mill in Berkeley County, South Carolina to accommodate major equipment upgrades related to company's wide and light product expansion.

The increased sheet steel performance in the second half of 2013 is due to a series of pricing increases that began late in the second quarter that were supported by competitor supply disruptions and slightly improved demand. The improvement in sheet steel is partially offset by decreased performance at company's bar and structural steel mills.