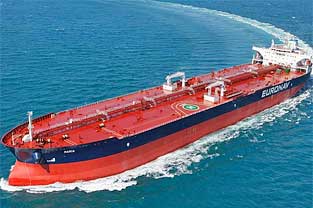 Nordic American Tankers announced that the 66th dividend of NAT is expected to be $0.25 per share compared with $0.16 per share for Q3 2013.


This time the dividend consists of two parts; a cash dividend of $0.12 per common share and a partial distribution of shares held by NAT in Nordic American Offshore Ltd. (NAO), equivalent to $0.13 per NAT share.

The board has declared a cash dividend of $0.12 per NAT share which is one part of the dividend. The record date for the cash dividend is planned for February 20, 2014 and the payment is expected to take place on or about March 3, 2014.

In addition, the board intends to declare a dividend composed of a portion of the shares that NAT owns in NAO. This portion is about $10 million worth of NAO shares. This will be equivalent to $0.13 per NAT share.

Before the $10 million distribution, NAT owns $65 million worth of shares in NAO (or 26% of NAO). The NAO subscription price was $15.00 per share. NAO objectives include a full payout dividend policy similar to NAT and a high liquidity in the share as is the case for NAT.

The trading of NAO is, for the time being, on Over The Counter (OTC) in Oslo, Norway. Adjusted for the USD/NOK exchange rate, the NAO stock is now trading at a US dollar value of $16.88 per share, an increase of about 13% since the launch. The share dividend to NAT shareholders is based on the subscription price of $15 per share.

Setting of a record date and the distribution of shares are expected around the time of the planned listing of NAO on the New York Stock Exchange, to take place as soon as possible. ■