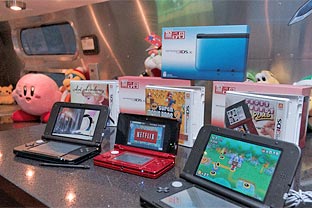 Foreign currency assumptions for the end of the fiscal year have been revised from 90 yen to 100 yen per U.S. dollar and from 120 yen to 140 yen per euro.

Nintendo 3DS continued to show strong sales in the Japanese market. The unit sales for Nintendo 3DS in the previous calendar year amounted to approximately 4.9 million units. However, outside Japan, while its market share increased, Nintendo 3DS did not reach company's sales targets in the overseas markets.

Using the U.S. market as an example, Nintendo 3DS became the top-selling platform in the last calendar year, according to NPD, an independent market research company, with its cumulative sales exceeding 11.5 million units; however, the estimated annual sales of the Nintendo 3DS hardware remain significantly lower than company's initial forecast at the beginning of the fiscal year.

In Europe, while the individual markets showed different results, France was the only market in which the company experienced relatively strong sales, and it failed to attain our initial sales levels by a large margin in other countries.

Wii U sales showed some progress in the year-end sales season, however, they fell short of company's targeted recovery by a large margin. In particular, sales in the U.S. and European markets were significantly lower than company's original forecasts, with both hardware and software sales experiencing a huge gap from their targets. ■