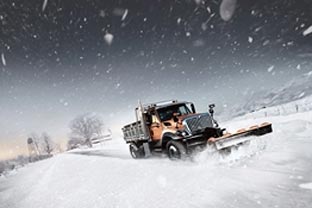 
Revenues in the quarter were $2.2 billion, down from $2.6 billion in the first quarter of 2013. Lower sales volumes, primarily due to the company's medium-duty emissions strategy transition and lower military sales, drove the year-over-year performance decline, which was partially offset by $67 million in reduced structural costs.

First quarter 2014 results include an unfavorable impact of $21 million due to fluctuations in foreign exchange rates and $18 million in asset impairment charges. Navistar Logo.

Navistar delivered at the high end of its first quarter manufacturing cash guidance range of $1.0 billion to $1.1 billion, ending the quarter with approximately $1.1 billion in manufacturing cash, cash equivalents and marketable securities. First quarter 2014 EBITDA was a loss of $110 million, which included $52 million in pre-existing warranty adjustments and a net $21 million in one-time items.

Adjusted EBITDA was a loss of $37 million, which was better than the company's first quarter guidance of a loss between $50 million to $100 million, excluding pre-existing warranty and one-time items.

Both represented the highest monthly retail share performance Navistar has attained in the last six months, and helped offset lower than expected retail performance in the first two months of the quarter. The company finished the quarter with an order backlog 56 percent higher than this time one year ago.

Also during the quarter, Navistar swept the competition at this year's American Truck Dealers Convention and Exposition in January. Selected based on a number of criteria, including innovation and design, safety and driver and owner satisfaction, the International ProStar with Cummins ISX15 engine and International TerraStar® 4x4 were named "2014 Heavy-Duty Commercial Truck of the Year" and "2014 Medium-Duty Commercial Truck of the Year," respectively.

Navistar continued engine restructuring efforts last month when it announced plans to consolidate mid-range engine manufacturing into its Melrose Park, Ill., engine plant. Once completed later this summer, these actions, which include idling the Huntsville, Ala., mid-range engine plant, are expected to reduce Navistar's operating costs by more than $22 million annually.

As a next step in its engine business restructuring, the company is announcing it will add selective catalytic reduction (SCR) emissions technology to its high horsepower inline six-cylinder (I-6) engine platforms to complement the recent launch of the Cummins ISB. The company is already taking orders with deliveries scheduled for this summer. ■