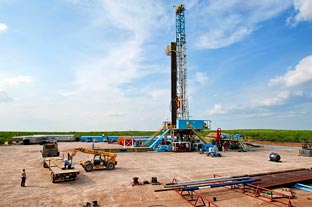 The company reported fourth quarter 2013 net income of $375 million, or $0.54 per diluted share, compared to net income in the third quarter of 2013 of $569 million, or $0.80 per diluted share. The decrease in quarterly earnings was primarily due to a significant decline in domestic and Canadian crude oil price realizations during the fourth quarter as well as higher non-cash unproved property impairments.

Driven by strong reserves growth in the company's U.S. resource plays, Marathon Oil's total net proved reserves were approximately 2.2 billion boe at the end of 2013, an increase of 8 percent from the prior year. Eighty percent of the 2.2 billion boe were LHC and SCO; 71 percent were developed.

Net additions, including acquisitions, were driven primarily by U.S. resource play activity in the Eagle Ford, Oklahoma resource basins and Bakken as well as additions in Oil Sands Mining (OSM) and Norway.

Hungary signs FATCA as the first country in the region