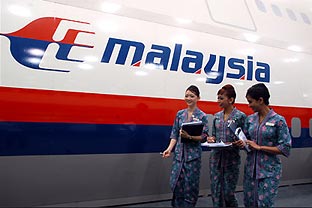 Malaysia Airlines announced a Net Loss of RM375 million for the three months ended September 2013. Despite the increase in operating expenditure, the group's earnings before interest, tax, depreciation and amortization (EBITDA) remains positive at RM52.4 million.


The loss is attributed to increased competition impacting yields, higher expenses affected by the weakening of the Ringgit against the US Dollar, increased charges at overseas airports, including higher overflying charges, an intensive advertising programme to build the Malaysia Airlines brand, and increased finance costs.

For the nine months ended September 2013, Malaysia Airlines group registered a Net Loss of RM830 million, and a positive cash flow from operations of RM555 million.

While the average price of jet fuel fell from $131 per barrel in Q3 2012 to $127 per barrel for corresponding period in 2013, Malaysia Airlines' fuel bill increased 16% in Q3 2013 due to higher volumes used with the increased capacity and traffic, as well as being affected by the weakening of the Ringgit against the US dollar.

The increase in operating expenditure is also attributed to a one-off cost incurred for redelivery of aircraft in line with its on-going fleet renewal programme. In addition, the Group intensified its advertising and promotional activities amid intense competition as part of a long-term strategy to continuously strengthen its presence in key markets.

A major objective of the national airline in 2013 was to drive improved presence and recognition of Malaysia Airlines as the value-based choice for the air traveler. This objective has been met. Malaysia Airlines is now flying an additional average of 10,000 passengers daily compared to the same period last year.

Corporate contracted business continues to improve year-over-year with the support ofoneworld and increased penetration of both domestic and international business. Changes in corporate purchasing behavior, such as the lowest logical fares, change in Business Class eligibility by many corporate clients from 2 to 4 hours, are placing additional stress on yields.

Increased pressure from international carriers with aggressive pricing from Malaysia is also impacting the market environment. Like all markets globally, Malaysia is seeing intense capacity growth and pricing pressure.

In addition to offering an enhanced guest experience and improved fuel efficiency over time, the fleet renewal will enable Malaysia Airlines to better match aircraft types to growth sectors and market demand, adding to the overall improvement in fleet efficiency.

The new aircraft will see Malaysia Airlines' average age of fleet reduce to 6.7 years by the end of 2013, comparable to notable regional players.

Its group fleet of 147 aircraft, including 6 A380s, has seen the arrival of 16 new aircraft to-date in 2013, including delivery of one new B738 each month in 2013. The new aircraft are part of an on-going fleet renewal programme to replace aging aircraft.