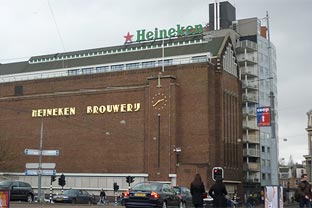 Heineken N.V. announced its trading update for the third quarter of 2013. Reported group revenue increased one percent,, +0.4% on an organic basis.


Group beer volume decreased by 2% organically (including the benefit of one additional selling day in the quarter), primarily reflecting weakness in Central & Eastern Europe beer markets. This was partly offset by an improved volume performance in Western Europe.

Consolidated revenue increased 4% to €5,179 million, including a positive net consolidation impact of 7% (+€369 million) and an unfavourable foreign currency effect of 3% (-€171million) following the depreciation of a number of key currencies against the euro.

Organically, consolidated revenue increased by 0.2%, with a total consolidated volume decline of 3.2% more than offset by a 3.4% increase in revenue per hectolitre (including a positive country mix impact of 1%).

"In the quarter, the recently acquired business of Asia Pacific Breweries again achieved solid growth. We also witnessed an improved sequential volume trend in Western Europe, resulting in a number of share gains across the region. However, underlying trading conditions across Europe remain challenging, as evidenced by a weak consumer environment in Central & Eastern Europe in the quarter.

"As a consequence, we are accelerating efforts to drive improved efficiencies, particularly in Europe, through restructuring and other cost related initiatives. Looking forward, we remain confident that our broad geographic spread and strong brand portfolio will continue to support long-term growth for Heineken," said Jean-François van Boxmeer, chairman of the executive board and CEO. ■