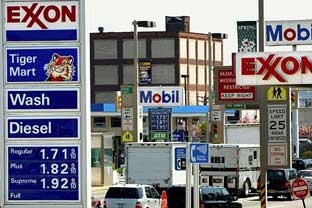 Exxon Mobil posted full-year earnings of $44.9 billion and Q4 earnings of nearly $10 billion, up 6% from a year earlier.

"Capital and exploration expenditures were a record $39.8 billion in 2012 as we continue pursuing opportunities to find and produce new supplies of oil and natural gas to meet global demand for energy. In 2012, the Corporation distributed over $30 billion to shareholders through dividends and share purchases to reduce shares outstanding," said Rex W. Tillerson, Exxon's chairman and CEO.