Staff writer ▼ | June 13, 2013
Dollarama, a Canadian dollar store operator, reported an increase in sales and an improvement in net earnings for the first quarter ended May 5, 2013. 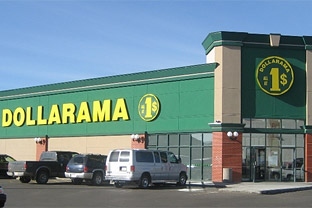 Dollarama, a Canadian dollar store operator, reported an increase in sales and an improvement in net earnings for the first quarter ended May 5, 2013.


The quarter was characterized by strong sales growth and solid comparable store sales growth despite difficult weather conditions; 85 net new stores were opened over the past 12 months, including 21 net new stores opened during the first quarter of fiscal 2014.

The acceleration of net new store openings over the past 12 months to 85 compared to 54 net new stores during the prior comparable period had a temporary cost impact in the first quarter of approximately 0.40% on gross margin and of 0.20% on general, administrative and store operating expenses (SG&A) due to costs associated with new store openings.

This cost impact is expected to continue over the next three quarters after which the corporation expects to realize the positive effects of an increase in the number of net new stores.

Sales for Q1 2014 increased by 12.6% to $448.1 million from $398 million in the corresponding period of the prior fiscal year. The increase was driven by the growth in the number of stores over the past twelve months from 721 stores to 806 stores, and continued organic sales growth driven by comparable store sales growth of 3.7% in the Q1 2014.

The corporation's board had approved a quarterly dividend for holders of its common shares of $0.14 per common share. ■

Stephen Hester to step down as RBS CEO