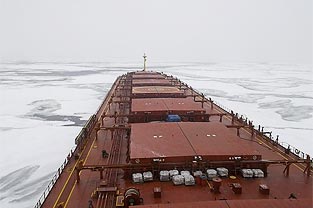 This was mainly due to reduced time charter rates, as well as the accelerated amortization of the prepaid charter revenue for the m/v Houston, due to the earlier redelivery of the vessel by the charterers, resulting in the unamortized balance of $3 million being recorded against time charter revenues in the fourth quarter of 2013.

The decrease in time charter revenues was partly offset by revenues derived from the increase in ownership days resulting from the enlargement of company's fleet.