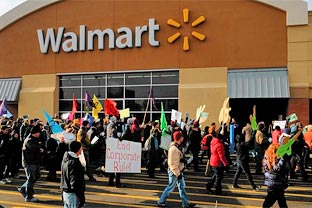 Walmart U.S. president and CEO Bill Simon announced a new fund for innovation in American manufacturing and a new supplier commitment to bring production of bikes and jobs to South Carolina.


Walmart and the Walmart Foundation will fund the five-year program and work in collaboration with the U.S. Conference of Mayors to launch it in March. The fund will provide grants to innovators in the manufacturing sector and seeks to create new processes, ideas, and jobs that support America's growing manufacturing footprint.

"If we want to grow manufacturing and help rebuild America's middle class, we need the brightest minds in our universities, in our think tanks, and in our towns to tackle obstacles to U.S. manufacturing. The $10 million fund will identify and award leaders in manufacturing innovation and help us all work together to create opportunity," said Mr. Simon.

Kent Bicycles announced it is moving production from overseas to Clarendon, S.C. According to Kent, when at full capacity in 2016, they will have added at least 175 jobs and will be assembling 500,000 bikes annually. The company, based in Parsippany, N.J., expects to start production in the fall of 2014.

"We look forward to bringing production to South Carolina. Our company moved all manufacturing overseas in 1990 because it was so much more cost effective. When Walmart made its commitment to U.S. manufacturing last year, it opened our eyes to restarting some manufacturing here. We attended Walmart's August manufacturing summit and were able to focus our efforts quickly and make things happen with South Carolina," said Arnold Kamler, owner of Kent Bicycles.

Walmart also announced that it will host its second U.S. manufacturing summit in Denver, Co., in August 2014. One focus of this year's summit will be connecting manufacturers in need of component parts to factories with excess capacity. ■

Fiat-Chrysler: We will not leave Italy
Savannah now the top US port for agricultural exports
ACCC applies to High Court for special leave to appeal Pacific National merger decision
TAQA completes transaction to create one of the largest utility companies in EMEA