US Airways and British Airways in codeshare agreement 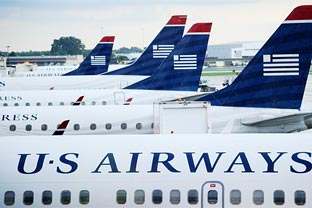 
Customers can now book tickets on codeshare flights for travel beginning May 14.

The remaining flights in the codeshare will be implemented in phases and will include British Airways routes from London to more than 70 destinations throughout Europe, Asia and the Middle East, and US Airways flights to nearly 40 destinations in North America and the Caribbean. Customers can expect to have access to all codeshare flights by the end of this summer.

US Airways expects in the coming weeks to begin implementing codeshare agreements with the other member airlines in the trans-Atlantic joint business, Iberia and Finnair, providing customers easy access to the joint venture's combined global network.

As part of the joint business relationship, members of the US Airways Dividend Miles and British Airways Executive Club frequent flyer programs are able to earn and redeem miles on flights operated by the other carrier, providing another valuable benefit to customers. In addition, customers will be able to earn miles when traveling on codeshare flights operated by the other airline.

US Airways joined the joint venture as an affiliate member earlier this year, and will remain as such until it fully integrates with American Airlines as part of their merger to create the largest airline in the world. ■