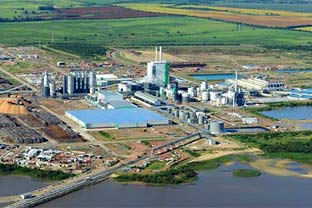 Uruguay's second pulp mill Montes del Plata started production following an investment of $2 billion, the largest in the recent history of the country.


Montes del Plata is located in Punta Pereira along the River Plate, not too distant from Argentina's capital Buenos Aires and is made up of three main blocks: the pulp mill, a harbor and a power station fuelled with biomass.

The plant has the potential for producing 1.3 million tons of pulp a year mainly from eucalyptus forests belonging to the consortium which are distributed in eleven counties of the nineteen that make up Uruguay.

The production system is based on state of the art technology for pulp making following European Union standards, IPPC and BAT, according to the company's release.