Staff Writer | July 12, 2016
Kimberly-Clark in Venezuela announced "the indefinite suspension of all operations in Venezuela, with immediate effect, due to the continuing deterioration of business and economic conditions." 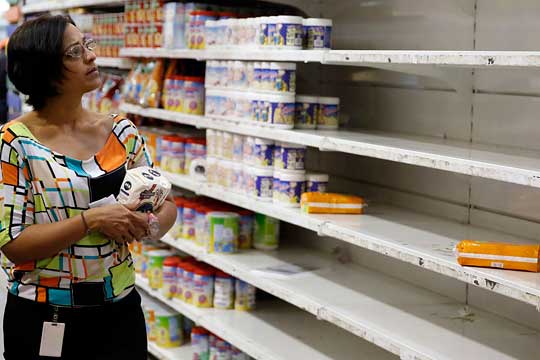 LatAm   New problems for people in Venezuela
Kimberly-Clark - the maker of Huggies diapers, Kleenex tissues, female sanitary pads and toilet paper - said that over the last two months it had already halted most of its production lines.

It said it had been unable to obtain raw materials or hard currency and had been adversely affected by high inflation.

"This decision is made after years in which the company has sought to address complicated circumstances beyond our control, such as the inability to buy raw materials, which in the past two months has caused most production lines close, and the lack of foreign currency and rapidly rising inflation. The combination of these factors makes it impossible to run our business at this time," the company said.

"Because of the long history that has Kimberly-Clark operating in Venezuela, today's decision is very difficult, particularly because of the efforts of our employees who have worked diligently, facing growing challenges to keep the business running."

"All operations in offices in Caracas, along with our plant and distribution center of Maracay, have been suspended indefinitely and Kimberly-Clark will not continue producing, marketing or selling their product lines while the suspension is in force."

"However, if the conditions change, Kimberly-Clark will evaluate its options regarding the viability of operating in Venezuela."

Kimberly Clark in Venezuela sells diapers, sanitary napkins, adult diapers and other personal hygiene products. According to its website, its average sales are more than $200 million per year and has a workforce of 1,000 employees.

Many of their products have controlled prices since 2011, with few increases, such as sanitary napkins and diapers, generating losses. ■

Fiserv adds John Kim to board of directors

Raul Castro says Cuba not on verge of collapse