Staff writer ▼ | April 2, 2014
Samsung SDI Co., a maker of TV displays and smartphone batteries, will merge with Cheil Industries Co., another Samsung affiliate that produces electronic and chemical materials, it said in a regulatory filing. 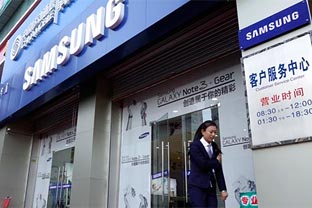 Samsung SDI Co., a maker of TV displays and smartphone batteries, will merge with Cheil Industries Co., another Samsung affiliate that produces electronic and chemical materials, it said in a regulatory filing.


The merged entity will be launched on July 1, and shareholders of Cheil will get 0.44 SDI share for every Cheil share they own. The deal is slated to be approved at the shareholders' meeting on May 30. Samsung SDI plans to keep its corporate name after the merger.

The merger is designed to help sharpen its competitive edge in the battery business by using Cheil's technologies in chemical and electronic materials, Samsung SDI said.

In January, Samsung SDI signed a preliminary deal with Anqing Ring New Group and Shanxi Province in northern China to open a joint venture by April. They plan to start the construction and operation of an electric-vehicle battery plant next year and together invest a combined US$600 million over the next five years. The company has been expanding its global presence by supplying batteries to BMW AG's i3 electric car and Chrysler's F500e models.

Samsung SDI's market capitalization is estimated to increase to 10 trillion won ($9.37 billion) through the acquisition, with 14,000 employees and a net asset of 15 trillion won.

Samsung SDI was set up in 1970 as a maker of Braun tubes for black-and-white TVs and added the rechargeable battery business into its portfolio in 2002.

Cheil, established in 1954, started its business as a textile maker and expanded its business line to chemicals in the 1990s and electronic materials in 2000s. ■