Staff writer ▼ | October 27, 2014
Saab has signed a contract with the Brazilian Federal Government (Ministry of Defense through the Aeronautics Command, COMAER) covering the development and production of 36 Gripen NG fighter aircraft for the Brazilian Air Force. 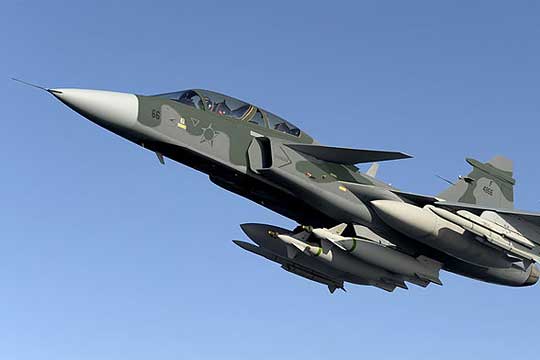 The deal   For the Brazilian Air Force
The total order value is approximately SEK 39.3 billion. Saab and COMAER have also signed an Industrial Co-operation contract to deliver substantial technology transfer from Saab to Brazilian industry.

On 18 December 2013 Brazil selected the Gripen NG to be its next-generation fighter aircraft, through the F-X2 evaluation programme. Since then all parties have negotiated to finalise a contract. Today’s announcement marks the successful conclusion of that process.

Saab and COMAER have signed a contract for the development and production of 36 Gripen NG fighter aircraft, plus related systems and equipment. The programme comprises 28 single-seat and eight two-seat Gripen NG. The total order value is approximately SEK 39.3 billion.

Saab and COMAER have also signed a contract for industrial co-operation projects, including technology transfer to Brazilian industry, to be performed over approximately ten years.

The contract with COMAER for Gripen NG and the associated Industrial Co-operation contract will come into effect once certain conditions have been fulfilled. These include, among others, the necessary export control-related authorisations. All of these conditions are expected to be fulfilled during the first half of 2015. Gripen NG deliveries to the Brazilian Air Force will be undertaken from 2019 to 2024.

The contract with Brazil strengthens the ties between Saab and Brazilian industry. Embraer will have a leading role as the strategic partner in the F-X2 programme. As part of the technology transfer plan, Brazilian industry will have an important role in the development of, and be responsible for, the production of the two-seat Gripen NG variant for the Brazilian Air Force.

The Gripen NG for Brazil and Gripen E for Sweden share all the attributes of the next-generation Gripen design, but are also tailored to each country’s specific national requirements. The commitments by Sweden and Brazil secure Gripen’s industrial and operational future into the 2050 timeframe. ■

Sales of BASF Group went up 3%