Petrobras to sell assets for $2.1 billion

Staff writer ▼ | August 19, 2013
Brazilian state-run energy company Petroleo Brasileiro (Petrobras) said that its board had approved the sale of $2.1 billion of assets. 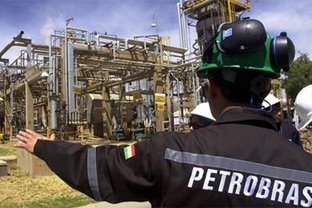 Brazilian state-run energy company Petroleo Brasileiro (Petrobras) said that its board had approved the sale of $2.1 billion of assets.


Petrobras said that it would sell the firm's 35% stake in the offshore Parque das Conchas oil field to China's Sinochem for $1.54 billion. The transaction continued the growing presence of Chinese oil companies in Brazil as China seeks natural resources to feed its economy.

Sinochem also paid $3.1 billion for a 40% stake in the Peregrino field operated by Norway's Statoil ASA (STO, STL.OS) in 2012, as well as stakes in several other offshore blocks in a separate deal with France's Perenco.

The Parque das Conchas field is operated by Royal Dutch Shell, which holds a 50% stake in the field. India's ONGC holds the remaining 15%. Both firms have the right to pre-emt the deal and buy Petrobras's 35% stake within 30 days, Petrobras said.

Petrobras also said that it would sell its stake in petrochemicals firm Petroquimica Innova to Videolar SA for $372 million and the assumption of 23 million Brazilian reais ($9.6 million) in debt.

Petrobras needs the cash to fund a $237 billion investment plan through 2017 that will develop massive offshore oil fields in Brazil. Petrobras discovered billions of barrels of crude oil trapped beneath a thick layer of salt off the country's Atlantic Ocean coast. ■