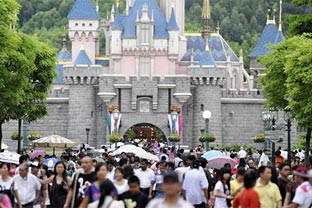 
PepsiCo and its partner in China, Tingyi Cayman Islands Holding, will exclusively provide beverages to the Shanghai Disney Resort, its first on mainland China which is set to open at the end of 2015, PepsiCo, Disney and Tingyi said in a joint statement.

Coca-Cola has had a long-standing tie-up with Disney, while it has been at least 25 years since PepsiCo last sold its beverages through the theme park chain, a Dubai-based PepsiCo spokesman said.

The deal is only a tiny segment of China's 421 billion yuan ($68.74 billion) soft drink sector, but marks a blow for PepsiCo against Coke in the highly competitive market, where both brands are coming under increasing pressure from Chinese rivals and changing consumer tastes for local flavors.

Disney said it currently has no plans to ink similar deals with PepsiCo to supply its other resorts, although it is "actively pursuing opportunities in a variety of different sectors," Murray King, vice president of public affairs for the Shanghai Disney Resort, said. ■