Staff writer ▼ | May 8, 2014
Mondelez International has unveiled plans to help advance the rights of female cocoa farmers in two of the world's largest cocoa-growing countries, Ghana and Cote d'Ivoire. 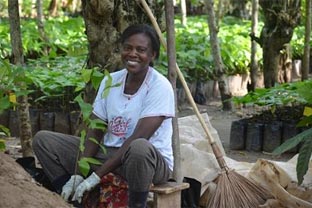 Mondelez International has unveiled plans to help advance the rights of female cocoa farmers in two of the world's largest cocoa-growing countries, Ghana and Cote d'Ivoire.


The action plans respond to new third-party assessments by Harvard University and CARE International, which revealed striking gaps in income and opportunities for female cocoa farmers.

In Ghana, female cocoa farmers earn 25-30 percent less than their male counterparts; in Cote d'Ivoire, women in cocoa communities earn up to 70 percent less than men. And in both countries, women struggle with lower farm productivity, smaller farms and less access to financing and farm inputs.

"Gender equality benefits everyone and is essential if cocoa communities are to thrive," said Christine M. McGrath, Vice President of External Affairs and Cocoa Life.

"These assessments underscore the size of the challenge we face in boosting female cocoa farmers' incomes and advancing women's rights in cocoa farming. This affirms our decision to promote gender equality as a cross-cutting theme when we first created Cocoa Life, and it bolsters our resolve to help lead the fight to eradicate this issue in Ghana and Cote d'Ivoire, our two largest cocoa origins."

In Ghana, Harvard University's Hiscox and Goldstein study indicates dramatic gender gaps beyond cocoa income and productivity: women have a 25 percent lower level of training, a 20 percent lower receipt of loans, and 30-40 percent lower access to critical farm inputs such as fertilizer. The Ghana study found major levers for change are farmer training and access to finance, which are strong predictors of use of key inputs on farms, thus, improving productivity and income.

In Cote d'Ivoire, CARE International affirmed the crucial role women play in the cocoa economy - but there is much work to be done to achieve gender equality, because the starting point for women is so low. For example, the research found that of the 4 percent of women in cocoa co-ops, almost none are in leadership positions. On land ownership, the study found that 86 percent of men had legal rights to their plots, while in 67 percent of cases, the land accessed by women was not owned by them.

CARE International noted after one year of Cocoa Life's gender-related interventions, there are some tangible results in the involvement of women in community-level leadership and financial inclusion. However, more needs to be done to deepen partners' and stakeholders' understanding of the challenges faced by women in Cocoa Life communities, especially participation in decision-making processes as well as access to assets and income-generating opportunities. ■