Staff writer ▼ | January 9, 2014
Sixteen of the nation's leading food and beverage companies sold 6.4 trillion fewer calories in the United States in 2012 than they did in 2007, according to the the Robert Wood Johnson Foundation (RWJF). 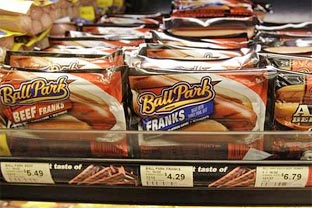 Sixteen of the nation's leading food and beverage companies sold 6.4 trillion fewer calories in the United States in 2012 than they did in 2007, according to the the Robert Wood Johnson Foundation (RWJF).


The companies, acting together as part of the Healthy Weight Commitment Foundation (HWCF), pledged to remove 1 trillion calories from the marketplace by 2012, and 1.5 trillion by 2015. The evaluation found that the companies have exceeded their 2015 pledge by more than 400 percent.

The participating companies sold 60.4 trillion calories in 2007, the year defined as the baseline measurement for the pledge. In 2012, they sold 54 trillion calories. This 6.4 trillion calorie decline translates into a reduction of 78 calories per person in the United States per day. This is the first effort to track all the calories sold by such major companies in the American marketplace.

The 16 companies produced 36 percent of the calories from all packaged foods and beverages, items such as cereals, snacks, canned soups, and bottled beverages, sold in the United States in 2007.

In order to evaluate the impact of the pledge, researchers at the University of North Carolina at Chapel Hill (UNC) combined data on foods and beverages sold by participating companies with nutritional information for those products. They then determined which individual products were included as part of the pledge and tracked sales of those products over time. All data used were publicly or commercially available. The full, peer-reviewed study is expected to be published later this year.

Other research has shown that, between 2007 and 2011, better-for-you, lower-calorie foods and beverages also drove financial performance for many of these same companies. ■