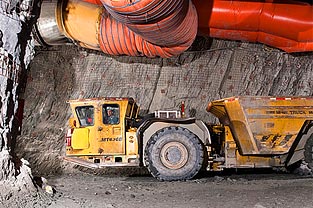 Supported by strong second quarter results and continued progress with its growth projects, the company remains committed to achieving its key guidance for the year, including producing 120,000 to 135,000 ounces of gold at cash operating costs between $800 and $875 per ounce, with total capital investment of approximately $90 million.

Entering July, the company is rapidly nearing completion of its current mill expansion project, to a capacity of 3,000 tonnes per day. Following completion of the expansion, production levels will increase to over 140,000 ounces on an annual basis, cash operating costs will improve to around $700 per ounce, capital requirements will decline dramatically for the balance of the year and the company will begin generating net free cash flow at current gold prices.

"We achieved strong operating results in the second quarter, including record quarterly production, average mill throughput in excess of current design capacity and higher grades that increased as the quarter progressed, averaging 4.6 gpt in June. We also continued to advance our key projects during the second quarter and are nearing the end of our mill expansion, with commissioning set to commence later this month. As a company, we are now fast approaching a major turning point," said Tony Makuch, president and CEO of Lake Shore Gold. ■

China and Pakistan to open link to the Arabian Sea

After eight years Total and Vitol acquitted in Iraq scandal