Staff writer ▼ | July 25, 2014
Kentucky Fried Chicken (KFC) has returned to Zimbabwe after pulling out for seven years due to an economic meltdown in the country. 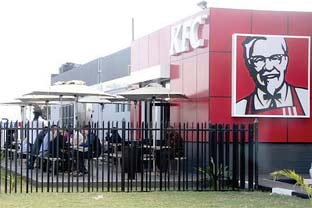 Kentucky Fried Chicken (KFC) has returned to Zimbabwe after pulling out for seven years due to an economic meltdown in the country.


KFC opened its only store at an upmarket shopping center in the north of the capital Harare this week. Reports have said the franchise, KFC Zimbabwe, operated by a South Africa-based Zimbabwean and a local investment fund, plans to open 25 more outlets.

KFC closed its Harare store in 2007 amid hyper-inflation, which in a year later forced the authorities to abandon local currency the Zimbabwean dollar for the American greenback.

The fast food chain's return to Zimbabwe had been on the cards for the past year with reports at one time suggesting that its return was being delayed by disagreements with government over the KFC Zimbabwe's intention to import chickens from neighboring South Africa. Reports say the issue had now been resolved as the company will now source its chickens from a local poultry company. ■