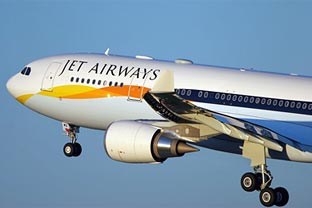 Jet Airways said that it will have a cash surplus of $200 to $300 million as it enters the next financial year.


Jet 's Chief Financial Officer and acting chief executive officer (CEO) Ravishankar Gopalakrishnan said in an earnings call with investors that the carrier will be in a comfortable position operationally irrespective of the state of economy in 2014/2015.

"The next (financial year) will be better if rupee stays at 62 to a dollar and the Brent crude is at $105 per barrel," he said.

Jet plans to strengthen its financial position by repaying expensive Indian rupee loan on its books by raising $300 million in external commercial borrowings (ECBs). Abu Dhabi-based Etihad Airways, Jet's strategic and equity partner, will help the carrier raise $ 150 million through its network of bankers. The remaining $150 million will be raised by Jet through its own bankers.

"The RBI has approved $150 million (ECB limit) and we hope to complete that transaction by the end of the fourth quarter and process is already under way to seek clearance to raise another $150 million from the RBI," Gopalakrishnan said.

This reduces the interest outgo by $30 million for Jet and it targets a total annualised saving of about $50 to $60 million as it renegotiates vendor and maintenance contracts. To improve its cash flow position Jet is also looking to raise foreign currency loans from Indian banks. An airline has majority of its operational costs in dollar denominations.

Jet is hopeful that it will conclude talks for either sale or lease of three of its grounded Airbus A330-200 aircraft by the end of this month. It has already made a net profit of $10 million on two similar aircraft which was reflected in its third quarter income.

Jet will add nine narrow body aircraft to its network and will strengthen its Gulf flights and expand on routes to the US and Europe, said Raj Shivakumar, Senior Vice President, Revenue Management, Jet Airways. ■