Staff writer ▼ | April 25, 2013
General Electric (GE) engineers are explorign how to use additive manufacturing with a wider range of metal alloys, including some materials specifically designed for 3D printing. 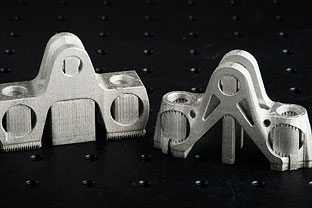 General Electric (GE) engineers are explorign how to use additive manufacturing with a wider range of metal alloys, including some materials specifically designed for 3D printing.


GE Aviation is looking to use titanium, aluminum, and nickel-chromium alloys. A single part could be made of multiple alloys, letting designers tailor its material characteristics in a way that's not possible with casting. A blade for an engine or turbine, for example, could be made with different materials so that one end is optimized for strength and the other for heat resistance.

All that is still on paper and GE's engine nozzle will be the first big test of whether additive manufacturing can revolutionize the way complex high-performance products are made. GE's aviation division is preparing to produce a fuel nozzle for a new aircraft engine by printing the part with lasers rather than casting and welding the metal. The decision to mass-produce a critical metal-alloy part to be used in thousands of jet engines is a significant milestone for the technology.

CFM International, GE's joint venture with France's Snecma, will use the 3D-printed nozzles in its LEAP jet engine, due to go into planes in late 2015 or early 2016 (CFM says it already has commitments of $22 billion). Each engine will use 10 to 20 nozzles; GE needs to make 25,000 of the nozzles annually within three years.

GE chose the additive process for manufacturing the nozzles because it uses less material than conventional techniques. That reduces GE's production costs and, because it makes the parts lighter, yields significant fuel savings for airlines. Conventional techniques would require welding about 20 small pieces together, a labor-intensive process in which a high percentage of the material ends up being scrapped. Instead, the part will be built from a bed of cobalt-chromium powder. ■