Staff writer ▼ | December 12, 2013
Fujitsu announced the creation of a further 192 jobs in Derry (Londonderry) including 177 fulltime positions and 15 business apprenticeships. 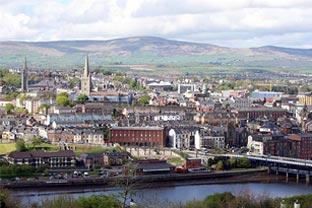 Fujitsu announced the creation of a further 192 jobs in Derry (Londonderry) including 177 fulltime positions and 15 business apprenticeships.


This is being made possible with an anticipated investment of 12 million pounds from Fujitsu over the next three years as well as over 990,000 pounds of support from Invest Northern Ireland towards the fulltime positions. The move will see Fujitsu establish a new Business Services Centre at its existing Timber Quay site and will bring the total number of Fujitsu employees in Northern Ireland to over 1000 across four locations in Belfast, Antrim and Derry.

The announcement was made at a visit to the Timber Quay offices by the Northern Ireland First Minister, Enterprise Minister and other stakeholders. With more than 35 years of presence in Northern Ireland, this is the fourth investment Fujitsu has announced here within the last seven years and will bring the total to over 36 million pounds invested in the Northern Ireland economy during this period. Fujitsu is the largest Japanese employer in the UK and Ireland.

The new positions will include a range of critical business support roles including administration, financial, procurement and human resources that will support Fujitsu's internal operations as well as technical and software orientated roles that will support ongoing work for a wide range of private and public sector customers across the UK and Europe. It is anticipated that recruitment will begin in the New Year. ■