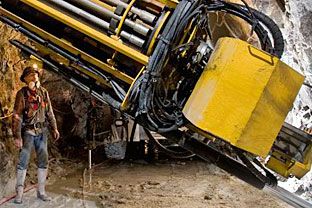 
Upon closing, MMR shareholders will also receive a distribution of units in a royalty trust which will hold a 5 percent overriding royalty interest on future production in MMR's existing shallow water ultra-deep properties. The combined company is expected to be a premier U.S.-based natural resource company with an industry leading global portfolio of mineral assets, significant oil and gas resources and a growing production profile.

On a pro forma basis for 2013, approximately 74 percent of the combined company's estimated EBITDA is expected to be generated from mining and 26 percent from oil and gas, with 48 percent of combined EBITDA from U.S. operations. The oil and gas assets being acquired are located in attractive onshore and offshore U.S. geologic basins. PXP's major assets include its established strong oil production facilities in California, a growing production profile in the onshore Eagle Ford trend in Texas, significant production facilities and growth potential in the Deepwater Gulf of Mexico and large onshore resources in the Haynesville natural gas trend in Louisiana.

MMR is an industry leader in the emerging shallow water ultra-deep gas trend with sizeable potential, located offshore in the shallow waters of the Gulf of Mexico and onshore in South Louisiana. The MMR portfolio is expected to provide a large, long-term and low cost source of natural gas production.

The transactions are expected to close in the second quarter of 2013. FCX has received $9.5 billion in financing commitments from JPMorgan Chase Bank, N.A. to fund the cash portion of the merger consideration for both transactions and to repay debt outstanding under PXP’s existing term loans and revolver. FCX intends to provide a guarantee for all existing PXP bonds and PXP in turn will provide guarantees for all current and future FCX bonds and term loans. After giving effect to the transaction, estimated pro forma total debt at September 30, 2012, is approximately $20 billion, or approximately $16.3 billion net of cash.