Staff writer ▼ | July 14, 2014
Fonterra is teaming up with Abbott to develop plans for a major dairy farm hub in China, the two companies announced. 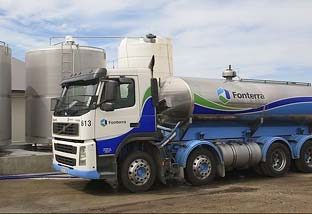 Fonterra is teaming up with Abbott to develop plans for a major dairy farm hub in China, the two companies announced.


The proposal, if it receives green light from Chinese regulators, would be Fonterra's third farm hub in China and would begin milk production in the first half of 2017.

The joint venture would leverage the New Zealand farmer-owned cooperative's expertise in dairy nutrition and farming in China and Abbott's commitment to business development in China, said a statement from Fonterra.

"This would be Fonterra's third farm hub in China and will complement our existing farming operations in Shanxi and Hebei provinces that have been very successful," Fonterra chief executive Theo Spierings said in the statement.

"Farming hubs are a key part of our strategy to be a more integrated dairy business in greater China, contribute to the growth and development of the local Chinese dairy industry and help meet local consumers' needs for safe, nutritious dairy products."

Both companies would work with Chinese regulators to obtain necessary approvals through the course of the project's development.

The proposed joint venture to invest a combined $300 million into the hub, which would comprise up to five dairy farms and more than 16,000 milking cattle, producing up to 160 million liters of milk annually.

The cattle would be either imported or sourced from Fonterra's existing farm hubs, and would all have genetics traceable to New Zealand, Australia, the United States or Europe.

Dairy consumption in China has been rising steadily over the past 10 years and the continued development of safe, high-quality milk sources is essential to meeting growing demand, said the statement. ■

Mexico to overtake Brazil as the top Latam automobile producer