Staff writer ▼ | May 13, 2013
Amtrak unveiled the first of 70 advanced technology electric locomotives being built by Siemens. The first units of the $466 million order will be field tested this summer for entry into Northeast intercity rail. 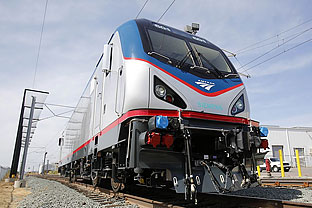 Amtrak unveiled the first of 70 advanced technology electric locomotives being built by Siemens. The first units of the $466 million order will be field tested this summer for entry into Northeast intercity rail.


"The new Amtrak locomotives will help power the economic future of the Northeast region, provide more reliable and efficient service for passengers and support the rebirth of rail manufacturing in America. Built on the West Coast for service in the Northeast with suppliers from many states, businesses and workers from across the country are helping to modernize the locomotive fleet of America's Railroad," said Amtrak president and CEO Joseph Boardman.

"More and more Americans are parking their cars and choosing the comfort and convenience of trains, metros and streetcars as their preferred way of traveling. We're proud of the innovations we've brought to passengers and commuters to expand their transportation options" said Michael Cahill, president of Siemens Rail Systems division in the U.S.

The new locomotives are designed for easier maintenance, will improve energy efficiency by using a regenerative braking system that will feed energy back into the power grid and will enhance mobility for the people, businesses and economy of the entire Northeast region. They also meet the latest federal rail safety regulations.

The first three locomotives will undergo a comprehensive testing program this summer, including two at a U.S. Department of Transportation facility in Pueblo, Colo., and one on the NEC. Once they are commissioned, production of the remaining units will ramp up for monthly delivery through 2016.

The new locomotives are part of a comprehensive Amtrak Fleet Strategy Plan to modernize and expand its equipment. The new units will replace electric locomotives that have between 25 and 35 years of service and average mileage of more than 3.5 million miles traveled with some approaching 4.5 million miles. ■