Megan Kelly ▼ | February 3, 2015
It is believed that Apple is interested in electric cars for some time now, so when a patent was granted to Apple Electric Car, Inc., that sparked a hope that the company is spreading into a new and unchartered territory. So, what is all about? 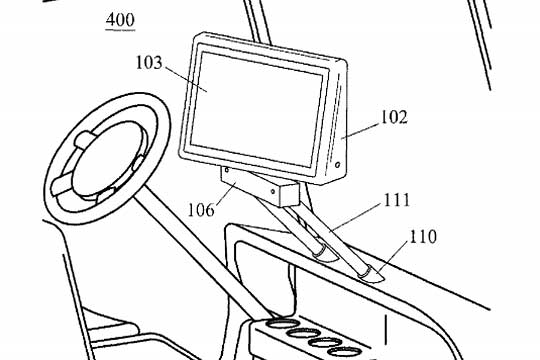 "The extension member is connected to the rigid base member and facilitates upward and downward movement of the display device distally from at least one point of attachment of the mounting system to the golf car housing."

So, we have a display device, an electric car, and the magic word "Apple" - enough to capture the headlines around the world. But don't get too excited, it seems you won't be driving Apple's electric car in a near future.

So, who's behind "Apple electric car?" Anthony P. Bonito of Davie, Fl., and Perry H. Pierce of Fort Collins, Co., are inventors with several patents related to golf, from golf car computers to scoring systems.

Mr. Bonito filled for his first golf car-related patent back in 1990 and after that he had several applications and two granted patents, the last of them this for Apple Electric Car, Inc. It is interesting that there were four applications for a display device attached to a golf car and, obviously, this last one was a success.

Mr. Pierce, one of the inventors for Apple Electric Car, Inc., with BSME, Mechanical Engineering from the University of Colorado at Boulder, also has several patents on his list, from this "Apple car" to "Integrated circuit assembly cleaning apparatus and method(Link)" to "Method for mounting printed circuit boards." He is an experienced engineer, with experience ranging from Hewlett-Packard/Agilent Technologies to Veeco Instruments to Colorado Microcircuits. So, we are talking here about golf enthusiasts and engineers-innovators, not a secret project by Apple to enter Tesla's market.

And what about Apple Electric Car, Inc.? The company filled Articles of Incorporation on April 30, 2013, and clearly stated its purpose: "Building electric cars". The registered agent is Mr. Bonito.

So, if Mr. Mr. Bonito and Mr. Pierce don't have any secret deal with Tim Cook, there is a small possibility that iPhone manufacturer will offer a golf car under its brand any time soon.

On the other hand, why would Apple bother with a mounting display in a golf car when it can make, or buy, a full-fledged electric passenger car? As the saying goes, "All that glitters is not gold." Or, "All that's 'Apple' is not Apple." ■

Apple to create $1 billion U.S. advanced manufacturing fund
73% of consumers do not intend to switch to Apple Watch for fitness tracking
Apple delays sale of its 'breakthrough' smart speaker to next year

Estonian fishermen forecast to have a tough year 2015