Staff writer ▼ | July 1, 2013
Dana Gas PJSC announced a new gas discovery on the West El Manzala concession in the Nile Delta, Egypt. Once fully developed, it is expected to add at least 1,600 barrels of oil equivalent per day. 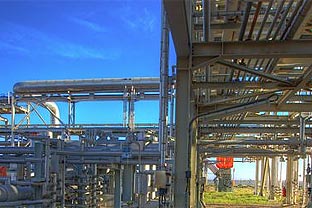 Dana Gas PJSC announced a new gas discovery on the West El Manzala concession in the Nile Delta, Egypt. Once fully developed, it is expected to add at least 1,600 barrels of oil equivalent per day.


The Begonia-1 discovery well encountered 15 m of net pay in a good quality sandstone reservoir of the Lower Abu Madi Formation. On test the formation produced 9.4 million standard cubic feet of gas with 133 barrel condensate. The evaluated resources for the Abu Madi Lower pay zone are between 7 and 15 billion cubic feet (bcf) and around 100,000 barrels of condensate.

A notification of commercial discovery has been made to the government and the Company is preparing to submit a development plan for this discovery as part of a Development Lease application. It is anticipated Begonia-1 will be tied into the existing South Abu El Naga Field flow line which will take the gas to the El Wastani gas processing plant. Once fully developed the field will add around 1,600 boepd of production. The company's average output for the first five months was 33,600 boepd in Egypt.

"The Company is pleased to announce another successful well discovery which will add to our production, cash flow and reserves in Egypt. We look forward to continue our appraisal drilling activities in the months to come," said Rashid Al-Jarwan, acting CEO.

Dana Gas is continuing constructive discussions with the authorities on its remaining outstanding receivables. During Q1 2013, Dana Gas collected $41 million with a 100% revenue collection. Dana Gas has a successful track record of gas discoveries in Egypt, with the Begonia-1 being the 25th since 2007.

Total investments in Egypt have exceeded $US 1.8 billion and the company is now the sixth largest gas producer in Egypt, producing 170 mmscfd, 4,000 bpd of associated condensate and 250 tons of LPG a day. The Company is working to further increase gas and condensate production for electric power generation and fuel supply in Egypt, and has a track record of expediting the tie-in of new discoveries.

In the Kurdistan Region of Iraq (KRI), the Company's 40% share of production in the Khor Mor Field for the first 5 months of 2013 was 27,700 boepd. Production is expected to increase once the LPG production is resumed after repairs to the loading bay are complete in the next few weeks. ■