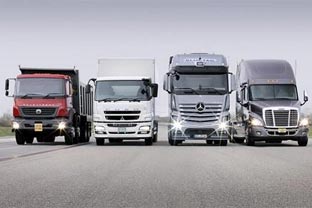 Daimler Trucks is about to reach its sales target for 2013 and to deliver more trucks than in any year since 2006.


In the first 11 months of the year, the division delivered 433,600 vehicles of the Mercedes-Benz, Fuso, Freightliner, Western Star, Thomas Built Buses and BharatBenz brands. As a result, sales were two percent higher than in the same period last year, when 424,000 units were sold. Based on first data for December, Daimler Trucks expects to close 2013 with an encouraging sales growth for the full year. The final global sales figures will be presented at Daimler's annual press conference on February 6, 2014.

Daimler Trucks also strengthened its leading position in Europe. While the market shrank by around six percent in Western Europe, sales at Daimler Trucks rose by nine percent through November to 56,800 vehicles (Jan.-Nov. 2012: 52,000). The division's market share of medium-duty and heavy-duty trucks rose to 24.2 percent (23.6 percent).

In Germany and the rest of Europe, Daimler Trucks benefited from the fact that it was ahead of its competitors in switching its trucks to the new Euro VI emission standard, which will go into effect at the beginning of 2014. The switchover of the Mercedes-Benz Actros, Antos, Arocs and Atego models as well as the Unimog and Econic special trucks enabled Daimler Trucks to round out its Euro VI-compliant product range long before the tougher emission standard takes effect.

In Turkey, Daimler Trucks performed much better than the market as a whole. Even though the country's market plummeted by more than 10 percent, Daimler Trucks was able to increase sales by three percent in the first 11 months of the year, to around 17,100 vehicles. The division correspondingly widened its lead over the competition.

Business also improved for Daimler Trucks in Brazil, which is Mercedes-Benz' biggest truck market. Daimler Trucks was able to benefit from its locally produced Mercedes-Benz trucks and increased deliveries by more than one third to 37,300 vehicles in the first 11 months of the year (Jan.-Nov. 2012: 27,500). The division's market share reached 24.4 percent (26.0 percent).

In Asia, sales have been affected by highly volatile and varied market developments in the year to date. In Japan, deliveries rose by seven percent in the first 11 months of the year, to 34,400 units (Jan.-Nov. 2012: 32,000). The demand for trucks was boosted by a government economic stimulus program. Daimler Trucks' market share remained relatively unchanged at 20.2 percent (20.5 percent).

In India the overall truck market declined almost 30 percent, due to an unexpectedly pronounced economic slowdown. Even though the Indian Daimler Trucks brand BharatBenz started from scratch, it nonetheless managed to come in fourth in the country's medium-duty and heavy-duty truck segment. Around 6,000 BharatBenz vehicles had been sold by the end of November. ■