CNOOC licensed to look for oil in the Arctic 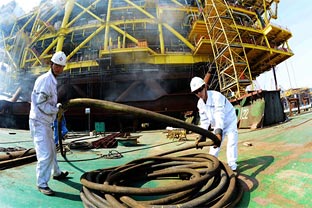 
CNOOC has partnered with Iceland's Eykon Energy in an application for a license to explore oil and gas resources in Arctic waters since last June, reports China Daily.

On January 22, Iceland's national energy authority, Orkustofnun, granted the new offshore license to the Chinese company as an operator with a 60 percent share, to Eykon Energy with a 15 percent share and to Petoro Iceland AS with a 25 percent share, the company told China Daily on Thursday.

Based on CNOOC's expertise in deepwater oil exploration, it has been accelerating steps in foreign offshore oil and gas businesses, including the largest-ever acquisition of Nexen Inc in the energy sector.

China imported 280 million tons of crude in 2013, up 4 percent year-on-year, according to the customs office. As the country's oil dependency on foreign supply continued to increase reaching 58.1 percent in 2013 China's domestic oil output remained flat at about 208 million tons. ■