Staff writer ▼ | June 23, 2014
The Board of Directors of Alstom received, on June 20, 2014, an update to the offer from General Electric (GE) to acquire the power and grid businesses of Alstom. It also received on June 20, 2014, a revised proposal from Siemens and Mitsubishi Heavy Industries. 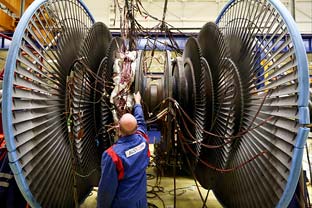 
The ad hoc committee of independent directors appointed by the Board on April 29, 2014 and led by Jean-Martin Folz, thoroughly reviewed, on multiple occasions, the proposed transactions. Based on the works of the committee and financial and legal advisors, the Board of Directors has unanimously decided to issue a positive recommendation of the offer from GE.

The Directors of Alstom expressed their satisfaction that the productive exchanges established with the French State had resulted in a business proposal that not only addresses the interests of Alstom and of its stakeholders, but also provides assurances in connection with concerns expressed by the French State.

GE would acquire, as previously announced, the Thermal Power, Renewable Power and Grid Sectors, as well as corporate and shared services (the Energy Transaction) for a fixed and unchanged price representing an Equity Value of €12.35bn and an Enterprise Value of €11.4bn.

Under the terms of the updated offer, following completion of the Energy Transaction, Alstom and GE would establish joint ventures in Grid and Renewable Power.

In addition, Alstom and GE would create a 50/50 Global Nuclear and French Steam alliance, which would include the production and servicing of the Arabelle steam turbine equipment for nuclear power plants, as well as Alstom's steam turbine equipment and servicing for applications in France. In addition, the French State would hold a preferred share giving it veto and other governance rights over issues relating to security and nuclear plant technology in France.

The investment by Alstom in these Energy related alliances represents ca. €2.5bn, assuming these companies are debt-free, cash-free. The terms of these alliances include usual shareholders agreements with standard governance and liquidity rights.

Finally, GE proposes the creation of a global alliance in which GE would sell Alstom 100% of its signaling business, with sales of ca. $500m in 2013 and 1,200 employees, and the companies would sign multiple collaboration agreements including a service agreement for GE locomotives outside of the United States, R&D, sourcing and manufacturing and commercial support in the United States.

The ad hoc committee of independent directors reviewed the transaction proposed by GE with the assistance of its financial and legal advisors. The financial expert appointed to advise the Board has concluded that the financial consideration offered by GE to Alstom is fair from a financial point of view.

The legal advisor appointed to advise the Board has concluded that GE's offer appears, from a legal point of view, favorable to the company, particularly in light of the fact that it provides for a fixed and final purchase price, does not require representations and warranties and, with the updates proposed by GE, addresses adequately the French State's concerns.

The Board, acknowledging unanimously the strategic and industrial merits of this offer, has decided to issue a positive recommendation of this offer, authorizing Patrick Kron, in his capacity of chief executive officer of Alstom, to engage in the next step of the process, with the information and consultation of the competent works councils within the Alstom group.

Under the terms of the improved proposal, Siemens would acquire Alstom's gas business for an equity consideration of €4.3bn, a €400m improvement versus the initial proposal. MHI would buy a 40 percent equity stake in the combined steam, grid and hydro business of Alstom through one single holding company, for a consideration of €3.9bn. In addition, Siemens would offer to enter into an up to 50/50 Joint Venture with Alstom in Signaling and Mobility Infrastructure.

After review, the voard has unanimously determined that this proposal does not adequately address the interests of Alstom and of its stakeholders. ■