Staff writer ▼ | December 9, 2013
Alibaba Group will invest $361 million in appliance maker Haier Electronics Group in a deal aimed at expanding Alibaba's logistics reach to the millions of consumers in China. 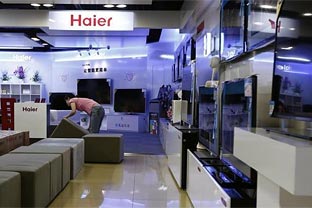 Alibaba Group will invest $361 million in appliance maker Haier Electronics Group in a deal aimed at expanding Alibaba's logistics reach to the millions of consumers in China.


Online retail is booming in China and Alibaba is seeking to develop Haier's distribution network for large-sized goods into a logistics platform that will reach lesser developed cities and which other companies can also use.

For Haier, the partnership with China's biggest e-commerce firm will further its expansion into online retail and logistics, a strategy aimed at giving it an edge in the fierce battle for margins in the world's biggest appliance market. Shares in Haier, in which KKR-backed Qingdao Haier owns a 47.8 percent stake, soared 20 percent to their highest in nearly 14 years after the deal was announced.

"This collaboration with Haier Group is a win-win-win partnership," Jack Ma, executive chairman of Alibaba Group, said in a joint statement. China's vast interior is expected to see rapid retail growth as more people move into urban areas and their spending power increases.

The agreement will see Alibaba acquiring a 9.9 percent stake in Haier's online marketplace Goodaymart, which under the joint venture, will form the basis of a logistics platform for large-sized goods that can be used by other companies as well.

Alibaba will also buy HK $1.316 billion worth of convertible bonds which can either be turned into shares in Hong Kong-listed Haier or a 24.1 percent stake in the joint venture. It will also subscribe to about 2 percent of Haier Electronics' enlarged share capital for HK$965 million, the statement said. ■