Staff Writer | July 14, 2016
Vietnam’s rice exports in the first half of the year fell by 32 percent over the same period last year, mostly due to competition from other countries, the Vietnam Food Association (VFA) has said. 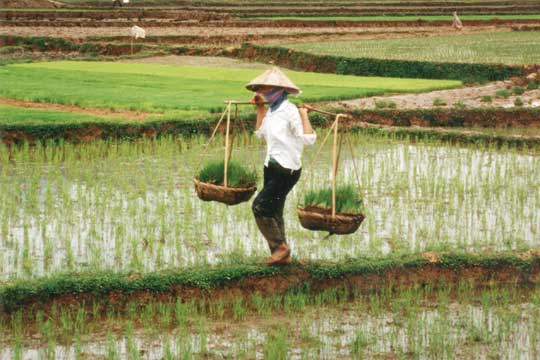 Food trade   The Vietnam Food Association:
In addition to rice exports from Myanmar, Pakistan and India, Vietnamese exporters had to contend with Thailand selling off a huge stockpile of its rice.

But with domestic rice prices higher than global rice prices in March and April, many domestic enterprises were unable to sign new contracts, leading to a fall in exports in the second quarter.

Asian countries remained the main buyers of Vietnamese rice, accounting for 67 percent of total rice exports, followed by Africa (16.4 percent) and the Americas (11.9 percent), according to a report released at a VFA meeting held last Friday.

However, in the first half of the year, total rice exports to Asia fell by 5.4 percent, dropping by 9 percent to China and 52 percent to the Philippines.

Unlike the fall of exports to Asia, Vietnamese rice exports to Africa and the Americas rose 10.8 percent and 11 percent, respectively, compared to the first half of last year.

During the period, exports of five percent and 25 percent broken white rice fell by 29 percent and 26 percent, respectively.

At the same time, exports of fragrant rice increased by 30 percent and 15 percent broken white rice by 18 percent, while sticky rice rose by 145 percent.

At the VFA meeting, the association adjusted the total export target for the year from 6.5 million to 5.65 million, excluding border trade, a year-on-year fall of 14 percent.

For the first six months, a total of 2.7 million tonnes of rice were exported.

Huỳnh Minh Huệ, VFA’s general secretary, said that local rice exporters expected to ship three million tonnes in the last half of the year, a drop of 22 percent over the same period last year.

Speaking to the press on the sidelines of the meeting, VFA Chairman Huỳnh Thế Năng said the target was based on the association’s data analytics, and that market conditions could change if the Philippines, Indonesia and others bought more Vietnamese rice.

Lâm Anh Tuấn, director of Thịnh Phát Co Ltd, said the target was feasible, as the price of Vietnam’s five percent broken white rice was the most competitive in the region.

VFA said the Ministry of Industry and Trade would organise a meeting later this month to discuss problems faced by the rice production sector. ■

Industrial production down by 1.2% in euro area