Christian Fernsby ▼ | March 20, 2020
FAO is further scaling up its activities to fight the Desert Locust upsurge in East Africa thanks to a $10 million loan approved in the United Nations' Central Emergency Response Fund (CERF). 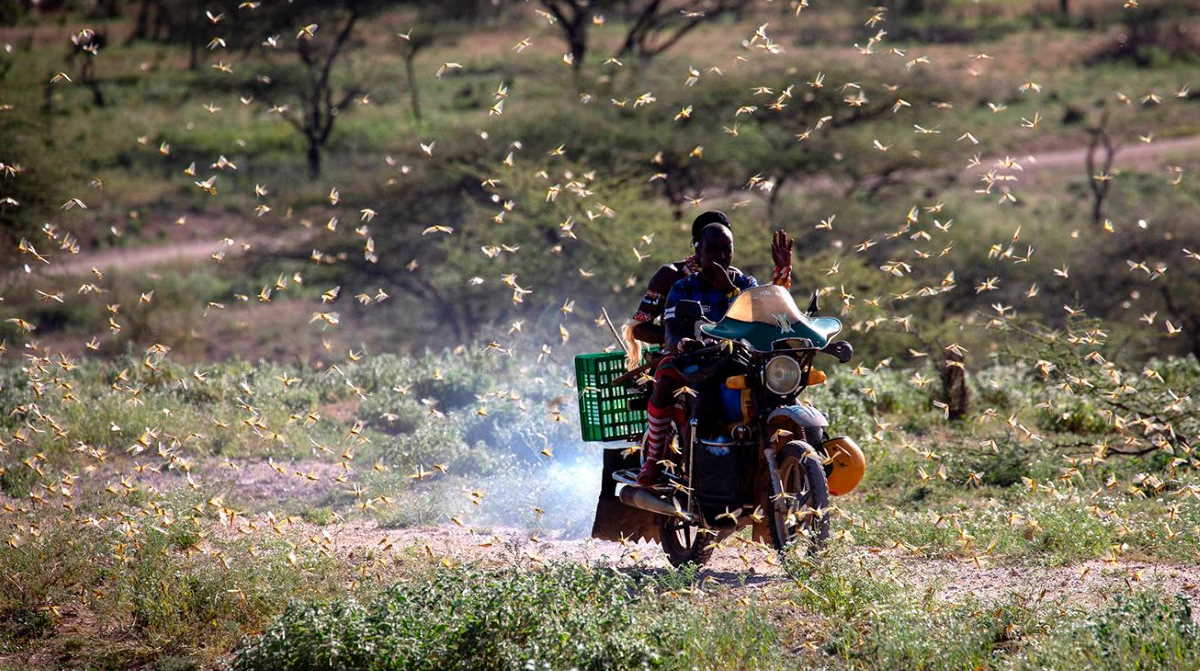 Food in Africa   FAO desert locusts
This loan will supplement the $10 million grant that CERF contributed to FAO in January to fight the outbreak which is threatening to provoke a humanitarian emergency in the region.

The CERF loan will be used to further scale up the desert locust control operations through the procurement of pesticides, hiring of helicopters and aircraft, the purchase of vehicles with spray equipment and the conduct of environmental impact assessments in the worst affected countries - Ethiopia, Kenya and Somalia.

It is not the first time CERF has provided loans to FAO. In 2017 CERF provided a $22 million loan for Somalia to avert the risk of famine.

The Desert Locust is considered the most destructive migratory pest in the world. A swarm covering one square kilometre contains 40 million locusts that can eat the same amount of food in one day as 35,000 people.

FAO's Desert Locust Information Service  says it is the worst outbreak to strike Ethiopia and Somalia for 25 years and the worst infestation that Kenya has experienced in 70 years. Djibouti and Eritrea have also been affected. Swarms have been reported in Bahrain, the Republic of Iran, Iraq, Kuwait, Oman, Saudi Arabia, the Sudan, Qatar, United Arab Emirates and Yemen, as well as India and Pakistan.

The situation is extremely alarming in East Africa, a region where 20 million people are already considered food insecure. There, the swarms have laid eggs and in a few weeks' time, these will mature, and start to eat crops - right at the start of the region's main agricultural season.

Pasture and croplands have already suffered damage in Djibouti, Eritrea, Ethiopia, Kenya and Somalia, and there are potentially severe consequences for the region where millions rely on agriculture and livestock rearing for their survival.

With the growing spread of the locust outbreak, FAO recently raised its appeal to $153 million to assist the countries that have been impacted - Djibouti, Eritrea, Ethiopia, Kenya, Somalia, South Sudan, Uganda, the United Republic of Tanzania. This also includes $15.2 million for the potential threat posed by the pests to the Sudan and Yemen. So far around $107 million have been pledged or received from donors so we urgently need to fill the gap.

FAO is already on the ground working with governments, and other partners to fight the upsurge. Locust experts and other personnel have been deployed to support governments with their surveillance and coordination. They are also providing technical advice and assistance with the procurement of supplies and equipment for aerial and ground operations.

In Kenya 600 youth have been trained and dispatched for ground and surveillance control. Three new planes have been handed over to the Government, increasing the treating capacity to over 1,500 hectares per day. Ten vehicle mounted sprayers will be provided to the Kenyan Government in the coming days, making it possible for the Government to treat an additional 5,000 hectares of locust-infested land each day.

In Ethiopia, a new FAO-procured high-speed turboprop aircraft has boosted the country's ability to conduct aerial spraying, and a second plane has been identified and will be handed over to Ethiopian officials by the end of March. Over 40,000 litres of chemical pesticides have also been delivered.

In Somalia, bands of juvenile hopper locusts are being treated with a biopesticide made from a natural fungus, which feeds on the insect, weakening and then eventually killing it - without the use of chemicals. Spraying equipment (8 Vehicle Mounted Sprayers) and other equipment have been delivered to scale up the control operations.

Desert Locust monitoring, forecasting and control are at the heart of FAO's mandate. Its Desert Locust Information Service has been in operation for nearly 50 years. FAO's well-established field presence, ability to link up authorities from different countries, and expertise in Desert Locust management, make it a key player in responding to upsurges like that currently affecting East Africa and the Red Sea area. ■