South Korea first in Asia to succeed at salmon aquaculture 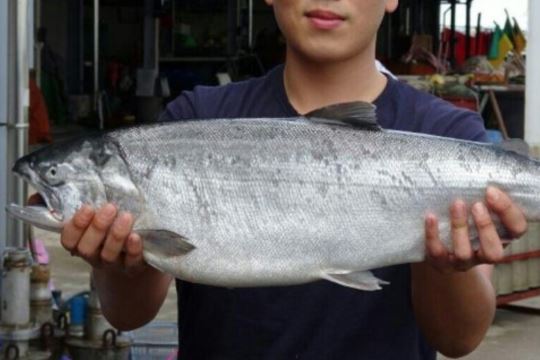 Salmon have an anadromous lifecycle, as they are born in rivers or streams, mature in the ocean, and return to their birthplace for spawning. Hence, salmon aquaculture requires two separate – freshwater and ocean water – breeding environments.

Furthermore, because salmon fail to survive in water temperatures exceeding 20 degrees Celsius, their farming had been considered impossible in Korean seas, which can heat up to over 29 degrees during summertime.

To overcome the setbacks, Donghae STF, a fisheries company, hatched salmon eggs imported from Canada in 2014, and raised them for 10 months at its aquafarm located in inland waters. After growing to 200 – 400 grams in size, the fish were moved to a sea farm in March 2015.

In order to maintain the surrounding water temperature at 15 – 18 degrees Celsius, the salmon were raised in a submersible fish cage that can be placed in waters up to 25 meters deep.

It took 20 months to raise 200-gram salmon to 5-kilogram mature fish, which are similar to their imported counterparts.

The successful mass breeding of the fish is also significant in that the global salmon market is rapidly growing, while there are limitations in catching wild salmon. The global salmon output was 4.24 million tons in 2013. ■