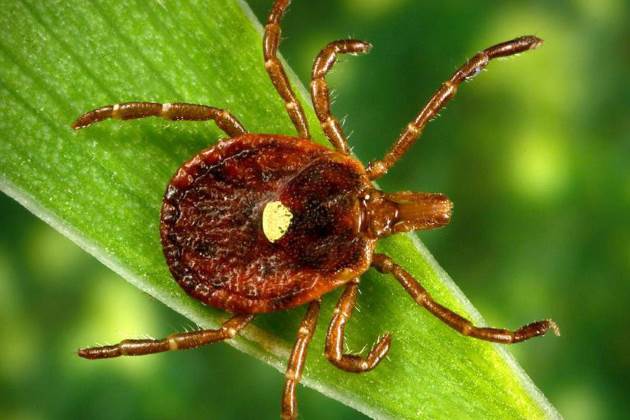 America   Haemaphysalis longicornis is known to infest a wide range of species
The confirmed Longhorned tick came from a dog in Benton County and was submitted through a research project at Oklahoma State University.

NVSL was able to confirm the Longhorned tick through a photograph and via molecular typing. Epidemiological investigation and further evaluation of this case is ongoing in cooperation with the USDA Animal and Plant Health Inspection Service (APHIS).

The Longhorned tick is an exotic East Asian tick associated with bacterial and viral tickborne diseases of animals and humans in other parts of the world.

This tick is considered by USDA to be a serious threat to livestock because heavy tick infestations may cause stunted growth, decreased production and animal deaths.

In other countries, the Longhorned tick has been implicated in causing disease in humans, including severe fever with thrombocytopenia syndrome.

Like deer-ticks, the nymphs of the Longhorned tick are very small (resembling tiny spiders) and can easily go unnoticed on animals and people.

This tick is known to infest a wide range of species and has the potential to infect multiple North American wildlife species, humans, dogs, cats, and livestock.

In November of 2017, USDA APHIS first identified the Longhorned tick in New Jersey. This was the first confirmed presence in the United States.

The Longhorned tick was subsequently found in Virginia and West Virginia. There are no known direct links between the cases in Arkansas, West Virginia, Virginia, or New Jersey.

“Livestock producers, animal owners and veterinarians should notify the Arkansas Agriculture Department or USDA APHIS if they notice any unusual ticks, or ticks that occur in large numbers on an individual animal,” says State Veterinarian Dr. Brandon Doss.

“We encourage livestock producers to work with their veterinarians to develop a tick prevention and control program.”

People can protect themselves, their children, and pets from ticks by using standard prevention methods such as wearing Environmental Protection Agency approved repellents, performing tick checks, and tucking in clothing. ■